Azerbaijani businessman Mr. Anar Aliyev (Alizade) has become one of the symbols of the recent successful young representatives of the business environment of Azerbaijan Republic. During the last year the name of Mr. Alizade has become even better known to the general public due to his numerous interviews, including his first in-depth interview with our magazine, revealing the false and biased attitude and double standards applied to Azerbaijan by some foreign organizations who have taken a hostile attitude against our country.

The success story of Mr. Anar Alizade can serve as an example for many who want to achieve great success in business in Azerbaijan. Made the first steps in business in his early age, Mr. Anar Alizade in his 37 years has significant experience in managing, several successful businesses and reputation of a reliable investor and partner, thanks to his determination and excellent business flair.

After starting a successful business from the import of textile and food products from Turkey and cars from abroad, Mr. Alizade has successfully begun to expand his activities in the capital. With the aid of his family and having a substantial start-up capital, he was actively engaged in real estate in Baku, the prices of which began to increase rapidly and earned him an impressive income at that time. At the same time, he started to develop the industry of construction of residential buildings, sales and purchase of construction materials and equipment. However, young and already at that time successful businessman did not stop there and founded Aztrans company which had a fleet of 17 large-capacity trucks for transportation and export of fruit and vegetables to the Russian market. In the mid-2000s he also became engaged in a profitable and at that time untapped niche – import of electronic and computer products from OAE to Azerbaijani market. Exploring the market of one of the largest exporters of oil, the businessman was interested in the experience of this country in the energy sector. The service business in the oil and gas sector has sparked his interest. Obvious perspectives for energy development in Azerbaijan and the high demand for a variety of equipment of local oil and oil service companies destined the businessman’s engagement in a new industry for him. The Grand Ltd. Company, founded by him, started to import equipment for energy industry. Grand Ltd. was one of the first companies which imported radiography oil pipe equipment to Azerbaijan in early 2000s. As one of the pioneers of Azerbaijani business in the UAE, Mr. Alizade has achieved great success in this country and has been presented on this market for more than 10 years. Successes of Anar Alizade in various fields, his reliability as a provider of high-quality service to oil service companies marked the beginning of his collaboration with SOCAR. An innovative approach and his ability to present the most advanced technological achievements of the world’s oil refining industry on the local market have destined his long-term successful cooperation with SOCAR and other local oil companies. After the establishment of the Union Grand Energy PTE company, based in one of the most prestigious and transparent jurisdictions – in Singapore, Mr. Alizade consolidated all existing businesses under this holding company and registered its representative office in Azerbaijan. As a result, Union Grand Energy is actively involved in various business industries in Azerbaijan including but not limited oil sector. One of the major achievements of Mr. Alizade, as a representative of the national business community, is his initiative on the establishment of national oil trading company SOCAR Trading SA, which, according to independent reports of international reputable consulting companies, has brought to Azerbaijan billions of dollars in profit. If, before the establishing of SOCAR Trading SA, SOCAR used to sell crude oil in the world market through foreign trading companies, after its founding SOCAR Trading SA has become a major center for the sale of Azeri crude oil. Afterwards, the price of Azerbaijani oil on the world market has increased significantly, and it firstly appeared on the world stock exchanges under its own brand. Particularly, Alizade’s participation in the establishment of SOCAR Trading SA and his active financial supporting at a period of global financial turbulence played a significant role in strengthening and further development of the company. That cooperation with SOCAR Trading SA has brought his partnership with SOCAR to a new level and approved his reputation as a reliable partner. A notable fact is that Mr. Alizade is one of the largest taxpayers in Azerbaijan not only from income earned here, but also abroad. The great part of Mr. Alizade’s business is concentrated in the non-oil sector of Azerbaijani economy. One of such major projects in Azerbaijan is the White City office building project in Baku. Nowadays, Mr. Alizade is the founder of numerous successful companies in various industries both in Azerbaijan and abroad. His transparent, fair and effective control strategy has allowed him to build strong partnerships with many local and international companies, as well as to properly represent Azerbaijani business in the global arena.

His transparent and effective approach to doing business in international scale and convincing defence of his fair position and national interests in his struggle against unfriendly forces, who have taken a hostile position towards Azerbaijan were main grounds for an independent decision to introduce the ‘Business Reputation’ award to Mr. Alizade. 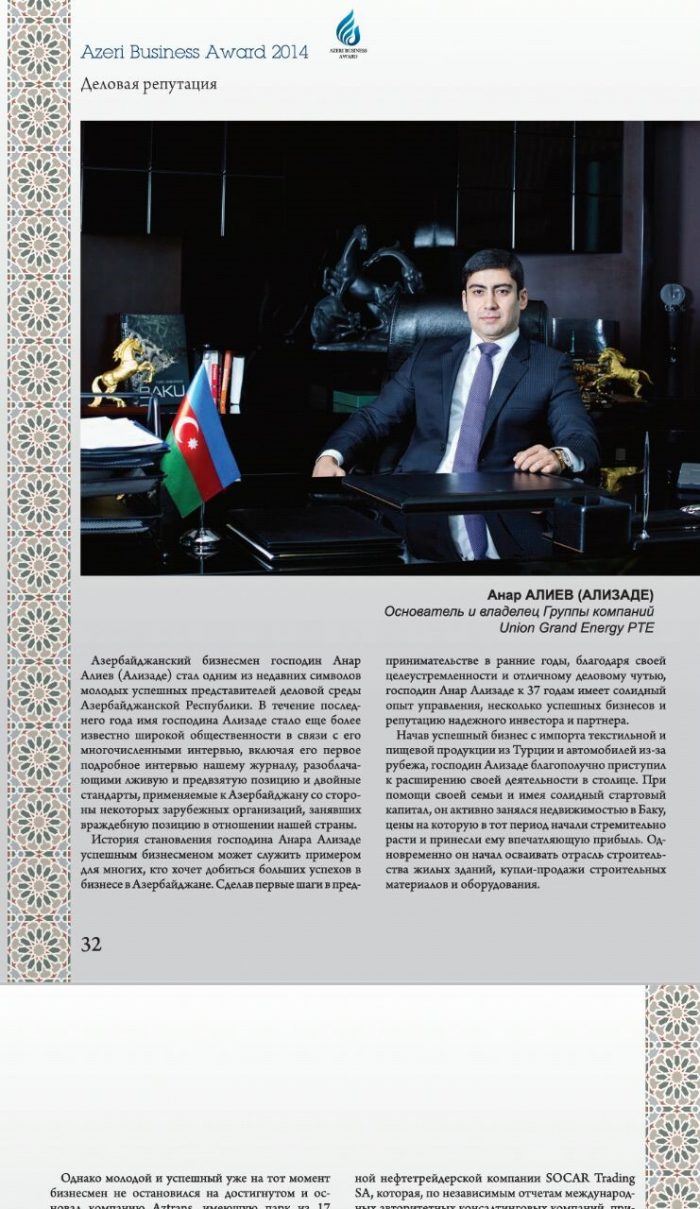